November 8th sees our resident sprinter Mercury again returning to the sign of Scorpio, joining the Sun, Venus and Saturn. He will remain in the Phoenix’ realm until the 27th.

The shift from Libra to Scorpio is palpable. Our circle shrinks—our intelligence is utilized for the survival of our select few.

Suspicions rise and loyalties are calculated. Deep are the musings, when Mercury inhabits the sign of the Scorpion.

The Winged Messenger comes from under the Retrograde Shadow on Monday, the 10th to immediately trine Neptune in Pisces the next day.

END_OF_DOCUMENT_TOKEN_TO_BE_REPLACED

Later today, the Sun and Venus will move into Scorpio and on Saturday the 25th, two additional majors shifts occur.  Mars ingresses from Sagittarius to the 10th sign of Capricorn while Mercury begins direct motion in Libra.

Mars in Capricorn is steady and ambitious.  The freedom loving vibe of Sagittarius is exchanged for the rigors of status, materialism and focus.

When the Warrior dons the mask of the Goat, the aim is self-motivated mastery. There is little desire to blaze one’s own trail, for the impetus is to build on tradition, work one’s way to the top of established structures. To leave an enduring legacy.

The Goat is level-headed, tenacious and self-controlled at best and cold-blooded, obstinate and dour at worst. They are skillful at the long term strategy but can run the risk of over cautious speculation.

Our dear Cappy Soldier is attracted to power which is a potent aphrodisiac and like all Earth signs, his is a sensual, strong libido. Combine this with the current positions of Sun and Venus in carnal Scorpio and the atmosphere steams up all around!!!

While in the 10th sign, the God of War will interact in major aspect with all six of the outer planets. Lots of hobnobbing with the big wigs on his agenda—just as the Goat desires.

On the same day, our dear Mercury, begins direct motion at 16º Libra. He has been retrograding since October 4th and will remain in Libra until the 8th of November. The Winged Messenger will finally move out from the retrograde shadow on the 10th at 2º Scorpio.

Mercury Direct marks the final sweep along the last half of the Relational 7th sign. We should find it easier now to incorporate all the lessons learned while Mercury once again occupies this slice of the zodiac. Thinking as a team; the art of the diplomatic debate; the charming necessity of ‘playing devil’s advocate.’

By the time the God of Thieves gets back to Scorpio, the Sun and Venus will be fully entrenched in the dark Underworld and Mars will be dueling with its Lord from Capricorn. Halloween may be over by then but the macabre ambiance of the heavens will be without a question palpable.

For the remainder of this week, we will see a pile up of planets in the relationship sign of Libra.

The Sun, Venus, Mercury Rx and the North Node are all conjunct within 5 degrees for a number of days.  Together, they form sextiles with Leo Jupiter and Sagittarius Mars.

If you have personal planets or points from 19°-25° of the Cardinal signs, this has your name written all over it.

This is the will to socialize and spend quality time with friends and loved ones.  It is animated conversations and pleasant evening get-togethers.

Any early Halloween parties scheduled now aren’t as sinister as they portend to be by October’s end.  No, these are charming Fall soirees full of allure and elegance. 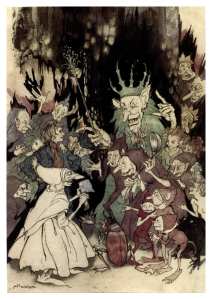 Retrograde Mercury heads back into Libra today, the 10th, where he will spend almost a month redoing some of the activities he began while in the 7th sign in September.

He will be joining with the Sun and Venus to sextile Mars and Jupiter later this month, as well as conjunct the North Node a few days later.

The first time Mercury sextiled Leo Jupiter was a feel good aspect .  This time around, with Mercury’s current retrograde status, Jupiter’s tendency toward expansion may blow up the technical difficulties and communication glitches. We’ll see.

The God of Thieves will also widely oppose Uranus again—here is info from the first time this went down.

When our winged Messenger goes back to visit the North Node, we get an opportunity to double check and recalibrate some of those future ideas we made with the initial conjunction.

Retrograde Mercury is all about tweeking to perfection.

This Saturday, October 4th, the grand-Fire-trine perfects, meaning the orbs of  trining Mars, Jupiter and Uranus will be tightest of the whole event.

It is also the day a variety of choice planetary activities occur.

Mercury moved into the 8th sign of Scorpio back on the 27th of September. He has gotten almost through the 2nd degree of the Fixed Water sign, but has slowed and turns retrograde on this day.

Retrograde Mercury inspires anxiety in more than a few astrology buffs.  But not to worry.  He certainly can be managed.  And yes, it is good thinking to expect all manner of glitches in all things mechanical and/or technological, at this time.  It is also not a good time to START new projects necessarily, but instead spend time in reflection.—most importantly, with Scorpio and Libra themed issues.

See where this is going?

END_OF_DOCUMENT_TOKEN_TO_BE_REPLACED

This Friday, Libra Mercury will inconjunct Chiron in Pisces.  Picking up where Monday’s SuperMoon left off, our minds will be filled with ruminations of old wounds and emotional injury.

Back in August, Virgo Mercury opposed Chiron—this was a simpler exchange of the Mind with the Healer.  Oppositions are a direct route—inconjuncts are not so straightforward.  August’s opposition saw Earth and Water swap energy—two elements that share astrological affinity.  This week’s quincunx is between Air and Water—not so much sympathy with these two.

In Virgo, it’s all about clutter.  Mercury Virgo deals with the cluttered mind, wanting/needing our mental functions to be streamlined, efficient—no dead weight.  Pisces Chiron aided Mercury here with forgiving our cluttered mental spaces and making room for compassion.  Not every thought and communication will be perfect.  And that’s ok.

Well, in Libra, the mind wants/needs social stimulation.  It’s all about relating.  Balancing the pros and cons of societal interaction.   So, given that, what does the Piscean Maverick  have for our Messenger God this time?  It will be a clumsy attempt at healing how we relate to others.  I say clumsy because quincunxes aren’t the easiest of aspects to tap in to.  More about that here.  You will need to use your brain and do a bit of navel-gazing to get it working.

END_OF_DOCUMENT_TOKEN_TO_BE_REPLACED

“a certain climate of excitement of the mind . . . people with spirit,   a furious inner excitement, a burning flame within . . .”

—Werner Herzog on what it takes

For most of this work week, we get to experience some outer planet love brought up close and personal with the help of Mercury, Venus, the Sun and Moon. (Mars gets some action on the weekend!)  It will be bit of a roller coaster, dipping low, then rocketing high, only to level out to a comfortable, real world stability.

Before we get started, I want to remind all that Uranus, Neptune, Pluto, the Moon’s Nodes and Chiron are currently retrograde and that means almost half the energy in the heavens has an introspective bend to it—a pensive ardor.

On Tuesday the 9th, Libra Mercury squares Capricorn Pluto Rx.    This is Cardinal Air knocking against Cardinal Earth.  Square energy is tense with an imminent need to do something about it.  The common thread for the day will be raw communication.  More than a few of us may get pulled in to a pit viper debate to the death.  Libra likes to chat and mingle and certainly won’t shy away from a lively battle of words and there is precious little flowery about Pluto.  Cardinal signs expect to be in control, so there will likely be a twinge of suspicion floating around about who is actually wearing the pants in a given situation.  The temptation to go for the jugular will be palpable.  Not much room today for the flexible and sensitive.

But having been forewarned, you could forego the negative above and use this mojo to initiate (Cardinal) a brilliant idea you’ve been pondering.  Use the Libra to balance and level, then put the Capricorn to use vetting a worthy structure of operation.  Or you can have a sincere intellectually riveting conversation or two about the state of humanity and our place in making it better.  Blunt isn’t bad, if the time has come.  Could go either way.

Hold tight, because Wednesday will be night and day from the previous 24 hours.  It’s looking to be the highlight of the week, with 3 exhilarating events.

END_OF_DOCUMENT_TOKEN_TO_BE_REPLACED

Mercury moves from Virgo to Libra early Tuesday, September 2nd.  He will stay in the sign of the Scales till the 27th.

This month our Quicksilver Trickster will be in major aspect with all the planets beyond the Asteroid Belt save Saturn and Neptune.  Then in October, he will retrograde from Scorpio back into Libra for almost an entire month.

the little black dot is Mercury

Almost two months in one sign by the fastest moving planet in our solar system!!  Yep.  So, let’s get acquainted . . .

Here our Messenger God is all about fairness and charm.  He tries to keep everything in perfect balance (more on that in a sec).  Hermes in the 7th sign of Libra loves a debate that gets the intellectual functions operating at high speed.  Libra is an Air sign and Air signs rule the intellect.  Mercury is our mind and communication, so he is very adept in this realm.